Sven Burman
November 16 2020 Sven Burman
- I don't even think that the people of Skellefteå themselves have been aware of how good cycling is on Vitberget until now. Thanks to our new bicycle park and a growing grassroots movement, Skellefteå is finally developing into the bicycle mecca it deserves!

- See you outside Cykel & Fiskecenter tomorrow then, we'll see where it goes, says Robert just before we part.
- Yes, it's going to be really fun, I answer and try to hide my nervousness. 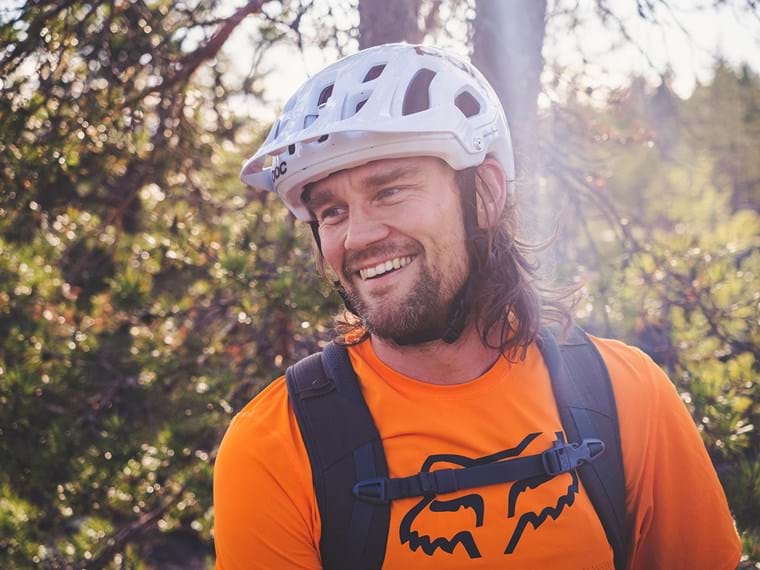 We are standing by the TV mast on Vitberget and I have just photographed and filmed Robert and his bicycle buddies bouncing over roots and rocks, along Vitberget's steep and narrow nature trails. They were fast! Hence my nervousness for tomorrow which I will return to later. Robert has arranged a mountain bike each for me, Hanna and Jeanette, and tomorrow it's our turn to follow Robert and bounce over roots and rocks. But let me back up the band a bit and take you back to Vitberget's trails.

- Vitberget has for many years been an undiscovered bicycle gem, Robert explains.

- We have been some avid cycling fanatics who find new paths every summer that we have connected with old favorites.

We are standing on a wooded ridge with his gang ready for the next downhill run. They are out of breath after stepping up. All have fully damped bikes with wide handlebars. 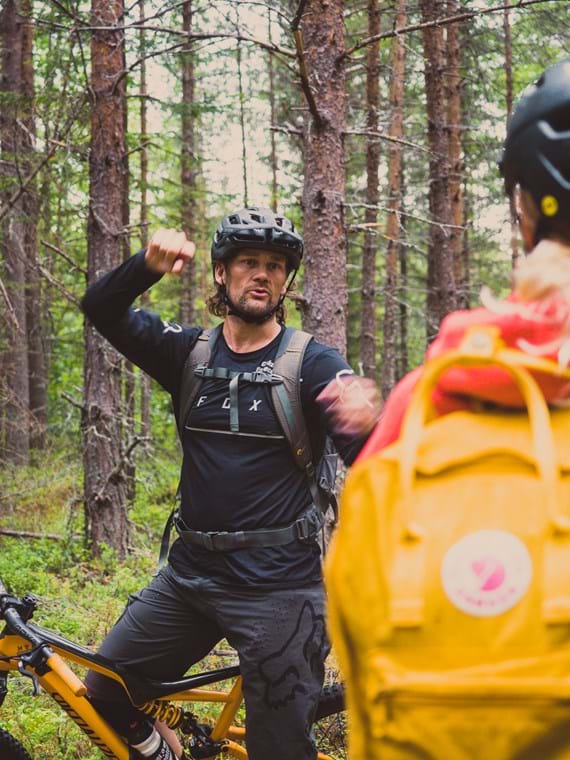 - This type of cycling is called trail or enduro, Robert explains. You go up a mountain and then cycle technical and fast-paced paths down and that is exactly the type of cycling that I am passionate about and have spent the most time on.

I can see thesparkle in his eyes while he talks.

- But there are actually a lot of more prepared mountain bike tracks on Vitberget and the new park so the offer for all types of cyclists is huge today.

Just a couple of 100 metres from where we now stand, one of Scandinavia's most extensive bike parks has just been completed. A modern bicycle park that includes a large pump track, skills loop, dirt track and three nice MTB loops of varying difficulty with bridges and wooden structures nicely integrated into nature.

- It has been really good, says Robert. It lowers the threshold considerably for those who want to get started and learn to ride a mountain bike or BMX. However, I still stay mostly out on the nature trails. This is where I thrive, he says and laughs.

Robert has been cycling downhill and enduro since 2008 when he bought his first bike. Initially, he was involved in the development of Bygdsiljum's bike park and he has also, through his company Ä V N T Y R, managed to guide groups around the terrain so he's beginning to be an experienced cyclist and recognized bike profile in the city. But cycling is not just about cycling, he explains. It's just as much about the nature experiences and about the community

- One of the most fun parts of cycling is that it brings together people of different ages and with different experiences. It doesn't matter how old or young you are or how experienced you are. I get really warm in my heart when I think about how familiar it often is, says Robert and smiles big before he starts rolling down the steep path that his friends have already taken while we have been buzzing. 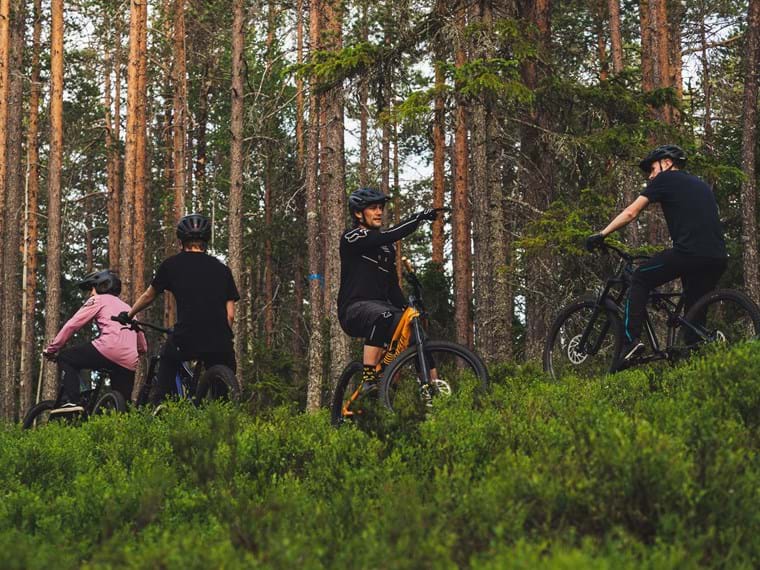 Drop a pin and cycle to new experiences

A night and a morning has passed since we said 'goodbye' on Vitberget, and now we are standing here in the parking lot outside Cykel & Fiskecenter as agreed, me, Hanna and Jeanette together with Robert. The background to today's excursion is that Robert, a few days before our photo and film session on Vitberget, had told us about his Google Maps excursions and had promised us that we could tag along on one. 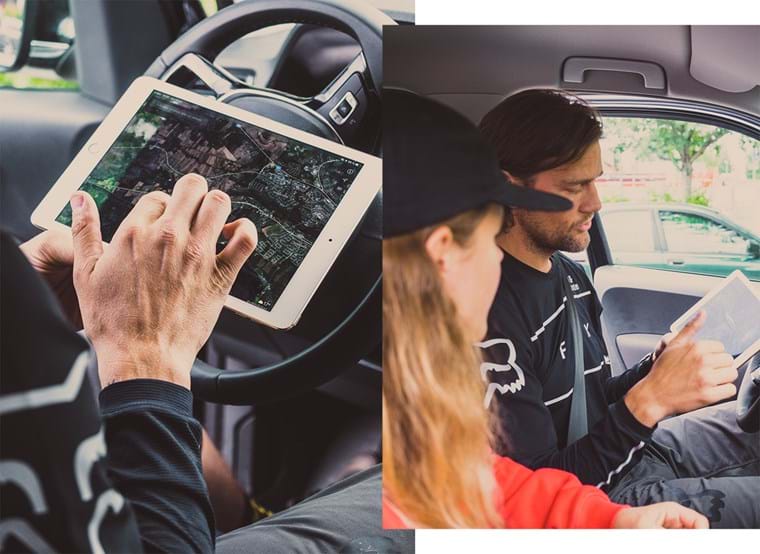 We have an iPad with us and we get in the car, with the bikes loaded on the flatbed and start planning the evening's trip. He explains that, thanks to his interest in cycling, he has discovered a dozen new places around the municipality in this very way.

- I am looking for exciting, and for me unexplored places. Then just drop the pin somewhere on the map where it looks interesting, get up on the saddle and step on it, Robert explains and pinches the air as if he were holding a map pin.

- It is, for example, very nice along the Skellefteälven, he continues, and scrolls upstream along the river, past Mobacken and Myckle. Hanna, who is sitting along, leans in over the iPad, zooms in over a forest area that is very nicely located along the river.

Robert and Hanna agree that we should explore a stretch between Myckle and Medle and Jeanette and I trust their gut feeling and Robert's experience. In the backpacks we have fresh trout in ready-made foil packages and coffee in thermoses, because everything becomes so much nicer with food or coffee that attracts. 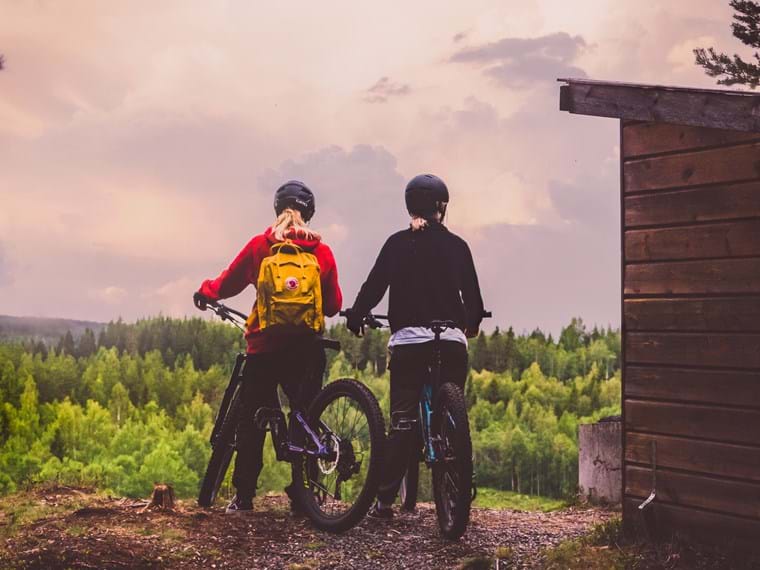 How our bike ride went is a different story. My, Hannas, Jeanette's and Robert's own story, and instead of telling it, I want to encourage you to create your own, because the very essence of this story is already told. How much can be discovered from a bicycle saddle in the Skellefteå area. How social cycling can be, and what opportunities a map and a bike can provide. 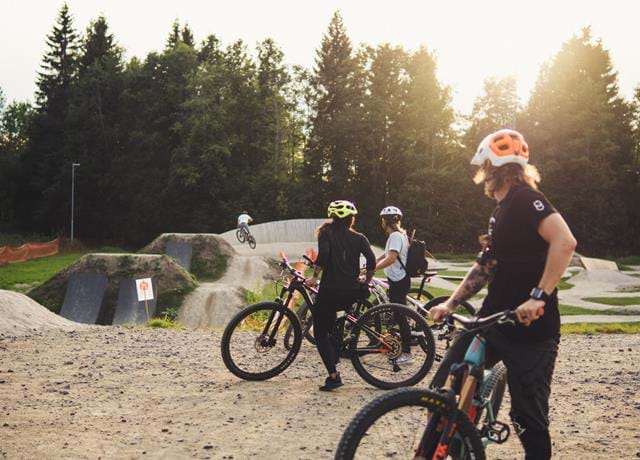 SKELLEFTEÅ Bicycle rental with a focus on "pump track", "skill park" and "trail". Guided Mtb-tours for both beginners and experienced cyclists. The area also offers service/repair as well as sales of bicycle parts and accessories. 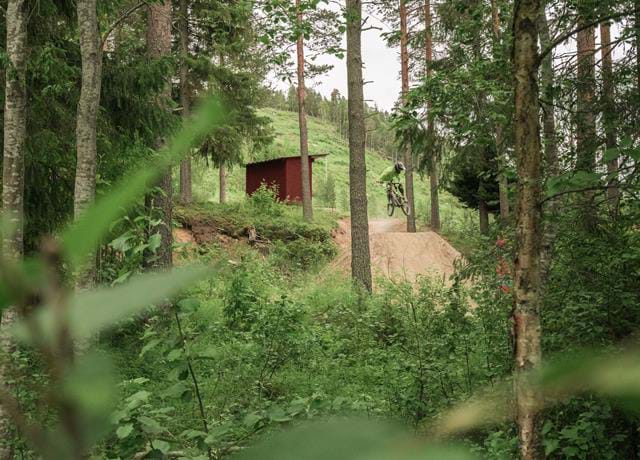 BYGDSILJUM You peek out over the precipice, take a deep breath and pedal down, down, down! Your mountain bike careens along narrow forest trails, over rocky terrain, footbridges, trunks and logs. Your adrenaline pumps and your lactate concentrations rise. This is some awesome action! 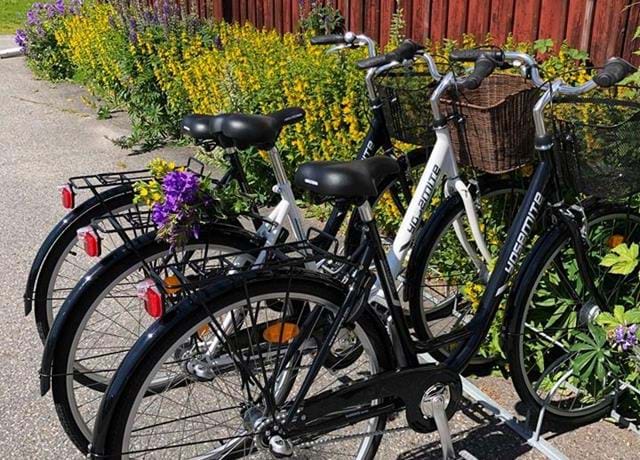 LÖVÅNGER Lövånger and the surrounding area is a really excellent area for road cycling. At Lövångergården there are two adult bicycles for rent. Ideal for those couples who stay a couple of nights and want to experience the surroundings 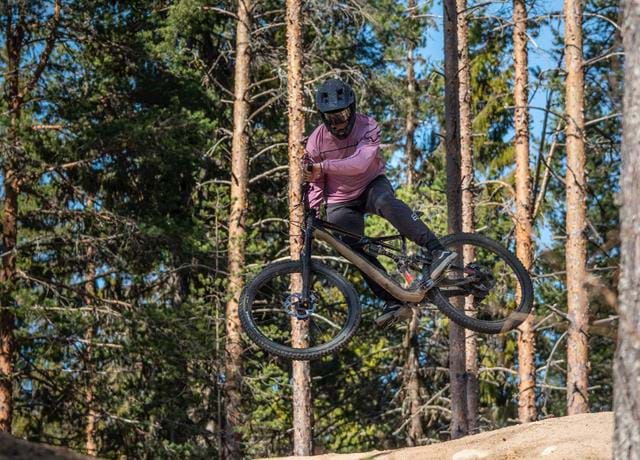 SKELLEFTEÅ When spring has arrived, the bikes are picked up, and that applies to everyone. Whether you are a child or an adult, a bicycle is the most fantastic means of transport you can use during the summer. With us, you can rent a bike!
{{favourites.count()}} Favourites