Nicole Castillo | From Chile to Nicole's Farm in Landfors

Sven Burman
April 26 2021 Sven Burman
Located in an old converted bakery, a few steps away from the Byske River, you'll find Nicole's workshop that I will finally visit. I have said fr a long time that I would visit, but it's rare to have that I'm in her neighbourhood as her home is far out in the woods. More specifically in Landfors, 15 km upstream along the Byske River, and the last kilometer is a gravel road which they shovel themselves during the winter.

But the road is freshly shoveled today I noticed, even though it's been snowing a lot lately. Nicole is waiting for me at the door, waving hello.

– Welcome to Landfors! she yells when I step out of my car. Was the drive okay?
– Yeah, it was fine, but I thought I had gone down the wrong path for the last 5 minutes. I din't know if I've driven past or not.

The residential building is located just over 100 m from the river and the several hectare plot extends all the way down to the water. I follow Nicole into the house, through the massive double doors and I see that she is decorating the Christmas tree with the children. It is December and Christmas is fast approaching. In the cozy living room, a newly lit fire is burning in Byskeugnen. 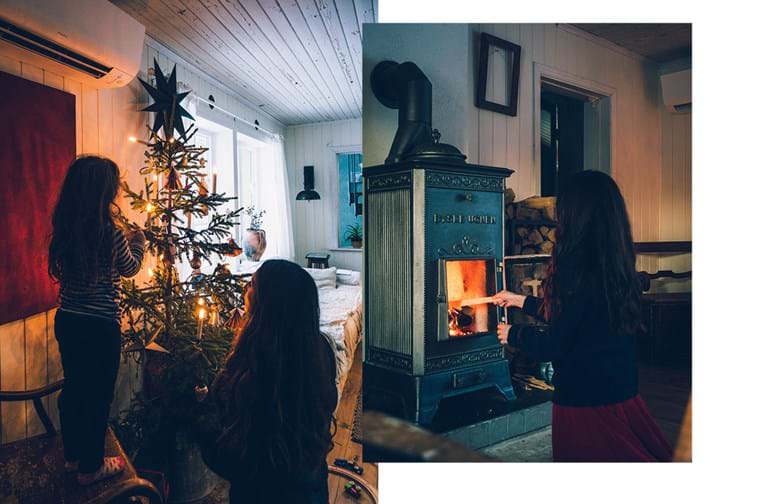 Nicole speaks Spanish with her children, mixes English and Swedish with me, and I speak Swedish with the children and Nicole's husband, Andreas.
- We're baking a cake! It only needs be decorated, says Nicole, and I'm ashamed to say that I'm unfortunately gluten free.

Everything in the house seems to have a history. The paintings, the interior doors, the porcelain.

- The house was built at the end of the 19th century so it is old, but we have renovated and expanded it quite a lot, and been careful to keep the old rustic feeling, she explains.

Nicole sees that my eyes are stuck on the big reindeer horn crown that hangs high up in the airy entrance.

- It is our friend Magnus who made that, she says. He has a summer house just a few kilometers from here. 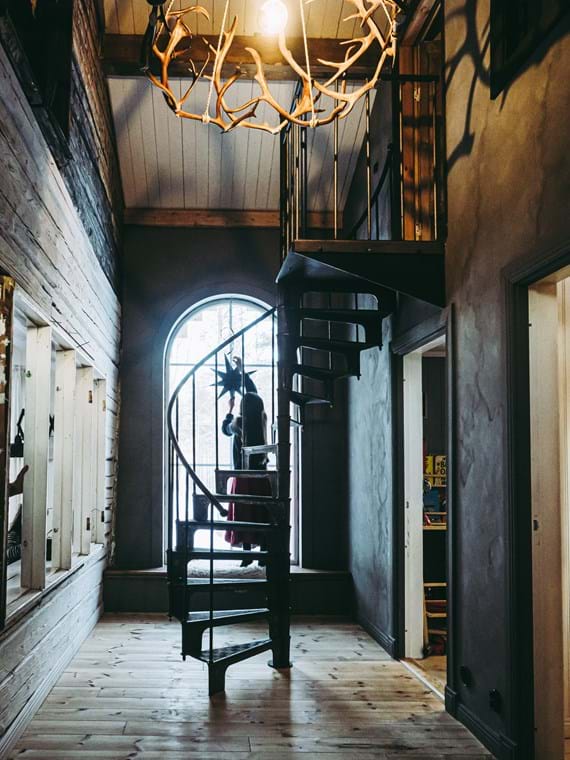 It's open all the way up to the ridge, above the reindeer horn crown, and in the middle of the floor in front of the arched window, an iron spiral staircase leads up to one of the bedrooms.

- I thought we would go down to our timbered cottage right down by the river so we get some peace and quiet. I have made a fire down there, says Nicole, while she packs a basket of coffee that we take with us when we walk down to the river to the cottage. Smokes comes out from the chimney.

Nicole was born and raised in Santiago, Chile, but says that she and her family moved around a lot in Chile.
- My father worked in the navy, so I have gone to 12 different schools. I was always ‘the new girl in the class’ she explains and laughs, so I'm used to change. But moving to the Swedish countryside was a bigger change than I could have imagined. It is a huge contrast between northern Sweden and Chile.

She met Andreas in Chile, who was there and checked a mine after a strong earthquake

- I usually say that it was an earthquake that brought us together, she also says laughing. After a few years together in Chile, Nicole became pregnant with their first child and they were faced with a very big decision.

- We could either choose to stay, in an apartment in Chile, next to heavily trafficked roads and shopping centers, but with the warm calm sea and the breaking waves constantly present. Or we could move to Sweden and live in the village of Landfors. The silence, the distances, the old beautiful houses and the wild river. I remember the first time we drove along the country road between Byske and Landfors and I saw all these fantastic wooden houses. Then I realized what a paradise I had come to and that we had made the right choice, says Nicole and smiles.

Outside the timbered cottage the snow is white, both on the ground and on the branches of the trees, and the river flows like a black snake through the white sparkling forest landscape. The December sun reaches just over the spruce tops even though it is the middle of the day. 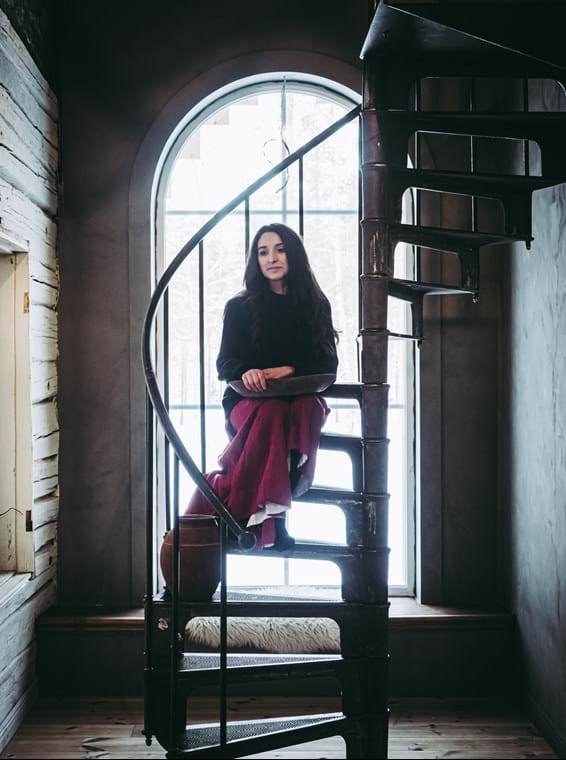 - This is the darkest time of the whole year. When I moved here, it was the middle of summer. So the brightest time. There is such a big difference between summer and winter here, but once the sun shines for a couple of hours and is reflected in the snow, the light becomes so soft and beautiful, she says and looks out the window.

- When I came to the house for the first time, I was struck by its incredible charm. It was very vintage. The first thing I did was walk around the house and visit my new home, says Nicole.
- Hi house, I'm your new owner. Nice to meet you! she says and laughs

Now, five years later, she runs an established business from her home - Nicole's farm, and out in the workshop she restores and sells old furniture. Many people come to visit her farm in Landfors to look at, and buy her furniture, and through Instagram, she has made a name for herself in interior design Sweden. 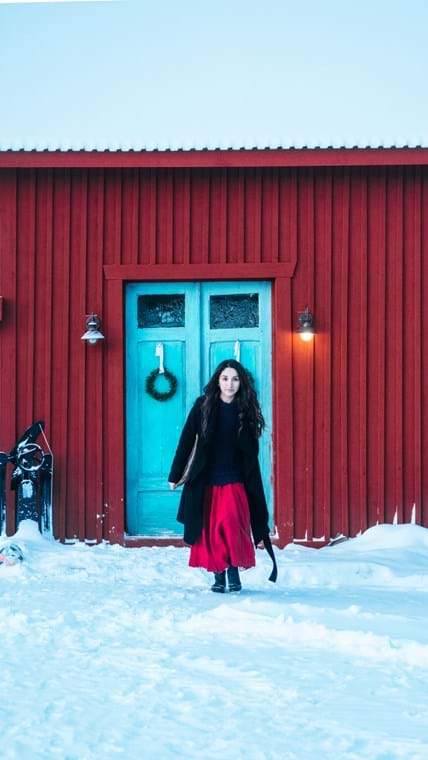 - Should we go and look in the old bakery, Nicole says when the fire has almost burned out and we have finished coffee. My workshop.

She says that her interest in old things has followed her since she studied history in Chile, and when she moved to Sweden she realized the range of old furniture available at auctions and flea markets.

- The interest in old furniture here in northern Sweden is huge, says Nicole and opens the old turquoise-painted wooden door into the bakery. 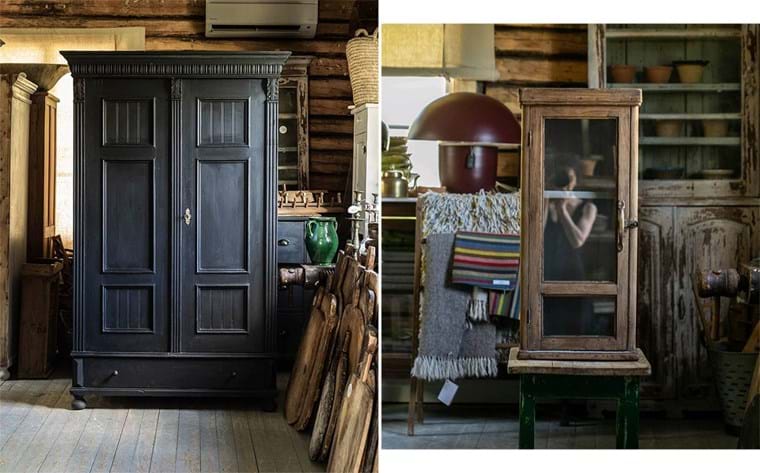 Inside the workshop are old beautiful cabinets and chests of drawers. Wooden plates, trays, bowls and candlesticks stand stacked tables and in one corner are rolled up hand-knotted wool rugs. It smells of wood and linseed oil. Nicole picks away some large wooden barrels and sets up two stools and we sit down in the middle of the floor.

- It may be a bit cheeky to ask, but how do you actually sell furniture when you live and run your business this way? I ask as I pick among the interior details on the table in front of me.

- Those who want to buy my furniture on site often follow me already in my social channels and once they come to Landfors to watch the furniture they want to buy, the visit to the place also becomes part of the experience and the reason for travel, Nicole explains. But most of my sales are done online, she explains as she grinds away old paint from a black-painted solid cabinet

A couple of months ago, Nicole also had a pop-up store at Isboden in Skellefteå. There, her existing customers, as well as new ones, could buy furniture, interior details and at the same time have good coffee from the gang at Isboden. 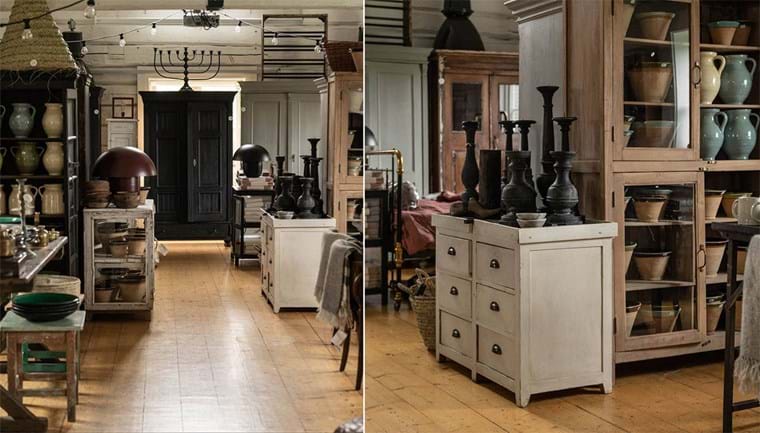 Outside the workshop, I suddenly hear a motor vehicle humming and I look out of one of the windows. It is Andreas and the children who will take advantage of the fresh snow that has fallen during the night. Behind a quad bike, a snowracer drags the children laughing, when Andreas drives in eights on the large plot.

It strikes me that the children's upbringing could have looked so different. That the choice that Nicole and Andreas made will play a big role for which individuals the children will be shaped into. In Chile, the snow racer had probably been a bodyboard and the fresh snow had been the foam from the breaking waves of the Pacific Ocean.

The sun is setting again behind the spruces and I realize it's time for me to move on. My plan is to capture the soft light over Marranäsvältan and Fällfors before it gets too dark. I say thank you for coffee and Nicole, Andreas and the children wave at me as I leave.

That I choose another road from Landfors to Fällfors and get stuck with the car in the deep snow and have to call Andreas who comes and pulls me off is a completely different story.

Are you ready to Change Your Life?

A life with more time for family, a life in a growing and green city with sustainability at its very heart - a simple life you, and your family, can enjoy. A green and relaxed life you'll find here in Skellefteå.